So I am working hard on my sight reading at the moment and have figured out that it gets a lot easier to recognise intervals when they come from something I know. When I hear the two tones played one after the other they become a puzzle piece from a melody and suddenly they make a lot more sense. I recommend looking through your own repertoire or musical memory and pulling out the songs that resonate best with you. Or feel free to borrow some of mine. 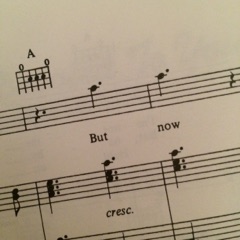 Well this ones fairly intuitive being a repeated note. But just to be all inclusive: The lead-in to the chorus of “Hopelessly Devoted to You” from Grease. 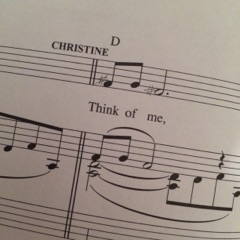 The good old semitone jump. Think jaws theme. Or to give it a musical theatre spin: the first few notes of “Think of Me” from Phantom of the Opera.

The first two notes of a major scale which lead in a lot of songs before starting on the major third. A beautiful example of this in a song I love is the first two notes of “On The Street Where You Live” from My Fair Lady. But to really get it in your head the title song from “The Sound of Music” should ring fairly familiar for you all.

Lets throw in some Wicked to hit up the minor third. Pops in where the title name starts in the chorus of “Defying Gravity.” Another good example is in Cabaret – [Life is] a Cabaret old chum. In fact there are a LOT of minor third intervals around. Mainly because they are the second part of a major triad and the coolest part of a minor one.

Hopefully you’ve drilled this one in your scales and arpeggios. And if you haven’t lets just run an arpeggio straight out of a song shall we to line it up. My Fair Lady‘s “I Could Have Danced all Night.” And just to double up – it’s the [Ad-vance] in Advance Australia Fair.

The ongoing repeated echo of “Look Down” that starts off Les Misérables is a perfect fourth. Gives you a lot of opportunities to hear it. (PS again it is in the Australian National Anthem – the first two notes that start it off… ([Aus-tral]-ians all…), and [We’re Off] to See the Wizard)

[Look down] and see the beggars at your feet…

Three full tones or 6 semitones. West Side Story‘s “Maria” – the beginning of the chorus with that haunting bizarre wonderful sound. That one will stay with you. And if it helps TV lovers – it also is the opening of The Simpsons. (*Also fun aside the [ri-a] is of course a minor 2nd as it is just under the fifth). 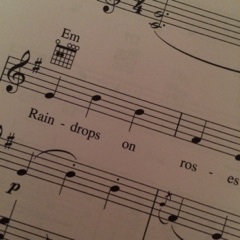 This usually to me is the beginning of The Last Post that I hear every Remembrance and ANZAC Day. But there are plenty of other examples. A good one is the start of each phrase in “My Favourite Things” from The Sound of Music.

Ah bless Sondheim to give us the fun ones. Into the Woods masterpiece “The Last Midnight” has a beautiful one that leads it in. The beauty of this and the tritone is they create a little semitone bridge either side of the fifth – so often you find that a fifth resolution follows.

Not exactly musical theatre but the first thing that always springs to mind here is old Scottish folk song “[My Bon]-nie lies over the Ocean.” Or to keep in step with the theme here theres always the penultimate phrase (third of four) in the verse of “Goodnight my Someone” from The Music Man. In fact if you start from the first phrase you get a fourth, a fifth and then here the major 6th.

[Our star] is shining its brightest light… 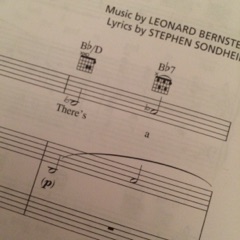 Back to good old Westside Story. “Somewhere” starts off with a lovely minor 7th jump. 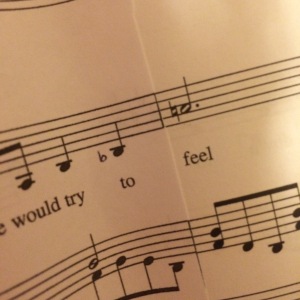 This has to be the toughest one to find I think. But there are a couple. The most clear is from A Chorus Line‘s “Nothing” that separates the first phrase and is the recognisable part of the song.  There is also the lead in to the final phrase of Company’s “Being Alive” (Being a-[live, Be]-ing a-liiiiiiiiive). And It’s also the little interval that plays before the run on music to Wizard of Oz.

Oh and my favourite of all because you can always hear it. Such a lovely jump. And again there are a few of these so I’m going to give you the one I love best. Let’s round this all off with “Over The Rainbow” from The Wizard of Oz. First two notes of the chorus – the ones that make it famous – that’s your octave.

[Some-where] over the Rainbow…”

And there ladies and gentlemen is a good start to recognising intervals on a sheet of music! Of course there are bigger intervals than exist within an octave but once you start heading into those if you have an octave down it shouldn’t be too tricky to extrapolate. Test yourself by singing the bits of the song when you read and then try it without it.

2 thoughts on “Reading and Recognising Intervals”