A while ago I did a post on musical theatre songs that relate to intervals in music: Some little memory tricks to make reading and singing intervals easier. Just incase you missed it, here’s part 1 again if you want a refresher: Reading and Recognising Intervals

So I take it you have learnt all of those!!! – But I’ve had some questions about finding the descending version of each interval. And in honesty, they can be much more difficult to wrap your head around than going up. So I’ve made a part 2 for you all!!! The flip side of intervals. A song doesn’t just go up and up and up (…  except at the end of Phantom of the Opera right sopranos?….) so it’s important to know your intervals going back the other way. Ready to give it a try? Let’s get started. 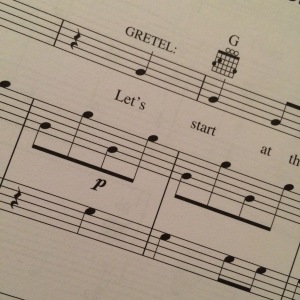 Well [let’s start] at the very beginning shall we? A unison being the same way backwards and forwards, why not use this example from Sound of Music‘s “Do-Re-Mi.” (Even though I know you don’t really need one)

[Let’s start] at the very beginning…” 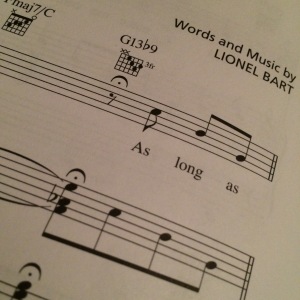 Lots of lovely minor 2nds in musical theatre – think of it as a leaning down sound that’s heading somewhere: an example of a descending minor 2nd is the first two notes of “As Long As He Needs Me” from Oliver. 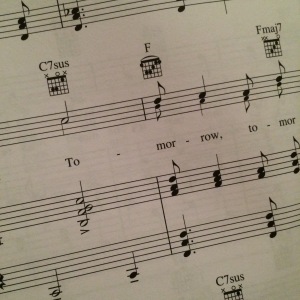 You will also find a lot of major 2nds – Mainly because its the usual way to get back to the tonic. This is essentially a tone which is arguably the most common step in a melody. A popular example of a descending major 2nd interval is the last two syllables of “Tomorrow” in the familiar song from Annie. 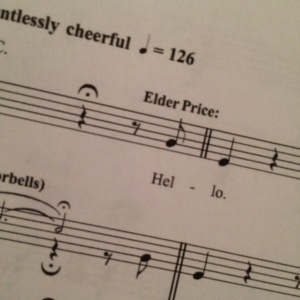 Here’s a fun one. You may recognise this descending interval as a common doorbell ring. Hence it being used in the song “Hello” in Book of Mormon. You will find it lots of other places too – one of my other personal favourites is as the repeating interval in the bridge of Over the Rainbow […If happy little bluebirds fly…] 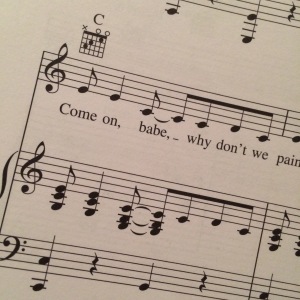 Another important one to know (especially if you want to sight read a melody) is a descending major 3rd. See if you can hear it in Cabaret‘s “And All That Jazz.”

An example of a descending perfect fourth is the first two syllables of the title song from Oklahoma. You can also hear it repeating in the main chorus from Sweet Charity’s Big Spender (Hey [Big Spen-] der) 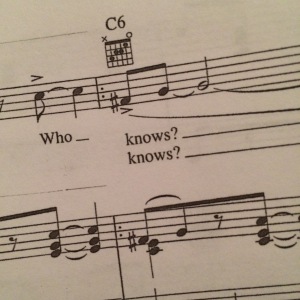 Our example of an ascending tritone was from Sondheim and Bernstein’s West Side Story and so also shall be the descending example. This time it comes from “Something’s Coming” – the second short phrase of the song shows the interval nicely: (Could be…. [who know]s) and also demonstrates how the note needs to resolve with the tied note that follows.

I’m sure there are lots and lots of these but finding a descending one is deceivingly difficult. And so I return to a favourite from The Wizard of Oz with “The March of the Winkies” which once you hear it will sound much more familiar than the title gives it credit for. You can also find it towards the end of “Get Me To The Church on Time” from My Fair Lady when [Get-me-to the church] is repeated twice before the final phrase. 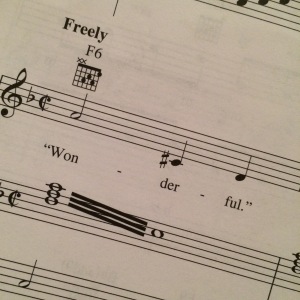 It would seem a descending minor 6th is much easier to find than the ascending equivalent – it has that great quirky sound and can be found in a couple of songs from Wicked as well as toward the end of the verses of Unexpected Song from Song & Dance. The best example I found was from Wicked‘s “Wonderful.” 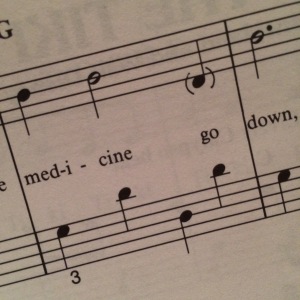 From the delightful Mary Poppins a descending (and ascending) major 6th can be found in “A Spoonful of Sugar” at the end of the first phrase of the chorus.

For our minor 7th drop there are a few good examples. There’s one in the title song of Company, it’s the big drop in the melody of Pure Imagination from Charlie and The Chocolate Factory. Most famously though it is the end of the second phrase of Phantom of the Opera‘s “Wishing You Were Somehow Here Again.”

Again (like the ascending) this interval is the most difficult to find (Almost as difficult as it is to sing…). So difficult in fact that although this example is technically correct it is probably not that intuitive. Between each of the verses of “Some People” from Gypsy there is a drop from the C to the accidental that starts each verse (a C#). If you happen to have a better one I would love to hear it in the comments below!

And because there is truly none like it, let’s wrap up our octave with “There’s No Business Like Show Business” from Annie Get Your Gun.

And there you have it! All the intervals you can find between tonic and octave. Of course there are always bigger and bigger intervals depending on how many octaves you span. But you should be able to build all of those using these tools. Once you know what your intervals are, have a think about how they fit in the music and what they achieve musically. The more you know and understand the easier it will become to read music. Happy practising and thanks for dropping by!

3 thoughts on “Intervals part 2: The flip side of intervals”